Mimi Habtu has grown up with coffee. Born in Ethiopia, one of the largest coffee producers in the world, attending Ethiopian coffee ceremonies was a part of her life starting early on. Since living in the U.S., she has attended and performed many coffee ceremonies. “It’s the biggest Ethiopian tradition,” Habtu explains.

Ethiopians don’t frequent local coffee shops, as is common in the U.S. “We only had coffee ceremonies. It’s a ritual,” Habtu says. “No one teaches it to you, but you grow up with it.”

Ethiopian coffee ceremonies aren’t like your average “coffee date.” They require more time and effort and lead to deeper connection. “Coffee ceremonies are signs of respect and hospitality. It brings people together and gives them time to talk and socialize,” Habtu explains. “It’s a time to be present. It’s calm and relaxing. We take time to connect with coffee (called “bunna”) and show respect and tradition with guests, friends, neighbors and family.”

Habtu shares, “We all need time to connect. We don’t know what people are going through. It’s a time to find out more about people—your family, your neighbors and your kids. It’s an opportunity to get to know another person and what’s going on or a time to talk about issues.” 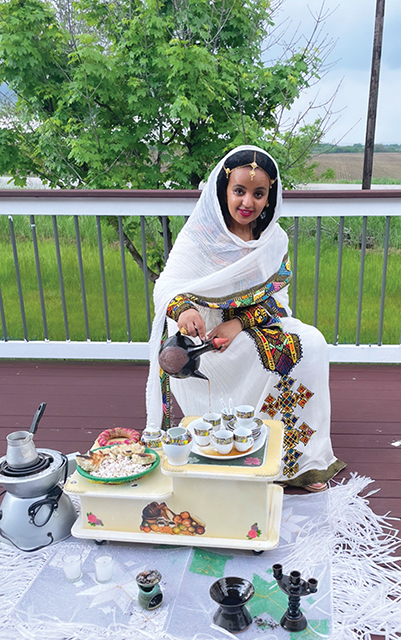 Traditions of a coffee ceremony

An Ethiopian coffee ceremony is often performed at holidays—such as the Ethiopian New Year and Christmas, at weddings and regularly with family and friends. “Here in the U.S., we often have it once a week, such as Sunday afternoons. We look forward to it,” says Habtu. “In Ethiopia, people have coffee ceremonies up to three times a day!”

In a traditional ceremony, the female of the house makes and serves the coffee. She also often wears traditional Ethiopian clothes. Kids can help make the coffee and are invited to try the last bit of coffee. Coffee is served from the oldest to youngest person, to show respect.

What’s involved in a coffee ceremony

The setting is important, as well as the coffee and the people. “We set up the area to be cozy and include some flowers and grass,” says Habtu. “There are no screens, phones or television during a ceremony. There are often snacks, such as peanuts or popcorn.”

To make the coffee, Habtu first washes the raw green coffee beans. Then she places the beans in a small pot over a portable burner. The coffee roasts in the pot until the beans get dark and oily. “Everyone smells the fresh roasted beans,” Habtu says. “The aroma of roasted beans is part of the anticipation of drinking the coffee.” 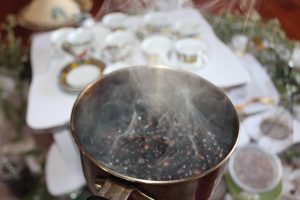 Habtu uses a coffee grinder to grind the beans, but notes that in Ethiopia, beans are traditionally ground with a mortar and pestle. After that, Habtu places a few spoonfuls of coffee grounds in a clay pot with a long neck, called a “jebena,” and adds hot water. She lets the coffee settle and brew for about five minutes.

Then she pours coffee into a small ceramic cup for each person. The process of adding water, brewing and serving is repeated two more times. The coffee ceremony often lasts two or more hours.

“It’s a time to get people together. We take time to pause and not worry. We say sit down, it’s coffee time (bunna time). Let’s drink coffee.”

Alison is a writer and editor living in Rochester, Minnesota, with her dog and cat.