“ Testify,” Annie Mack’s latest EP, showcases her velvety voice, her quest for self-love and her desire to empower Black women to step into their sovereignty.

The title track, “Testify,’’ develops into a rocking bluesy piece and honors the women who showed faith in Mack even when she wasn’t feeling it. It is followed by “Get on the Train,” which is about putting in the work to achieve your dreams and is written from the perspective of an elder talking to a younger person: “What do you have to lose besides time?”

Mack wrote “Shadows of a Kingdom” for her daughter as she watched her personal struggle and triumph. In describing this album as a “love letter to Black women,” she says, “How cool is it to hear lyrics like ‘sacred,’ ‘taking up space’ and ‘sovereignty’?”

In “Judge and Jury,” Mack sings about the hypocrisy of those who sit in righteous judgment of others without walking a mile in their shoes. She speaks specifically of protestors outside an abortion clinic who claim to be loving but aren’t meeting patients where they need to be met during one of the hardest decisions they have to make. She says, “God loves without stipulations. I went to school for theology, but I have no time for people who use (scripture) to be hateful.”

I wanted to make something accessible that people can relate to in some way and to honor the divine feminine and Black woman. 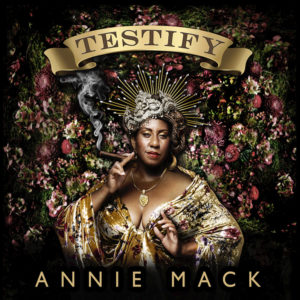 Mack calls the last track, “Walking Around,” a “revolutionary pursuit of self love,” adding, “We don’t ever take a moment to say ‘I’m incredibly grateful for this face, this body and the things that have shaped me in this life.’ Most love songs are about the pursuit of others; I was thinking about the days in the summer, when I feel the sun on my skin and I’m in love with the peace that I have. If you’re going to have those feelings, have them for yourself; fall in love with you.”

Mack says, “I always get nervous whenever I put something out there. I wanted to make something accessible that people can relate to in some way and to honor the divine feminine and Black woman. These songs are like an emancipation; I’m stepping into my full artistry.”

Mack had begun work on this EP early on in the pandemic and says she was “very grateful to have something to focus on during this difficult time.” She recorded the EP in Minneapolis and was in the midst of it when George Floyd was killed.

“One of the things I struggle with is not having the ability to emote and visibly be upset. I think about mothers who have lost sons and maintain incredible poise in public. As Black women, we’re told that we can’t show emotions because it threatens others. White women have gotten Black individuals killed with their tears, but when I am responding to a great injustice, I don’t have the privilege to respond with genuine emotion. I’m tired of pushing through. We have the right to emote and not be afraid of the fragility of others. I want to normalize Black women expressing ourselves.”

In addition to using her music to spread love and empowerment, Mack is also a death doula. “I was challenged to step into my spirit and talents and what I am passionate about,” she says. “Death has always terrified and paralyzed me, so I thought how cool it would be to get more understanding of it and to help take the stigma away.”

Mack is quick to recognize the collaboration that had to happen to create the EP, from the musicians she worked with to the creatives who helped design the album cover. With that cover, she wanted to show sovereignty with an edge. Note the cigar and Mack’s plain nails. She wanted to give a nod to blue collar women who work with their hands.

When asked what she would like to tell Rochester women, she says, “Tell them that I love them, they are goddesses, and they should not forget it. This is for all of us!”