“ Go back to your own country. You don’t belong here.” This is a  common phrase unleashed upon Asian Americans and Pacific  Islanders (AAPI) around the country—one that has grown more prevalent during the COVID-19 pandemic. The pandemic has brought a new wave of anti-Asian hate and discrimination. This has affected the AAPI community, from verbal assaults and violent attacks on individuals to destructive attacks on businesses.

According to the Stop AAPI Hate reporting center, there were over 6,600  incidents of hate reported in the U.S.  between March 2020 and March 2021.  Of the incidents, 65% were perpetrated on women, 11% on youth and over 6% on seniors. On March 16, 2021, eight people were killed in a mass shooting in Atlanta,  Georgia, six of whom were Asian women.

As a woman of the AAPI community who’s on her own journey toward anti racism, I know awareness is a key first step toward dismantling racism. Through my art, I create graphics and illustrations to help communicate important anti-racist topics such as allyship and solidarity. I  draw on my own experiences with racism to spread awareness and information.

According to a recent national survey  released by the nonprofit Leading  Asian Americans Unite for Change  (LAAUNCH), “Thirty-seven percent of  white Americans say they are not aware  of an increase in hate crimes and racism  against Asian Americans over the past year,  with 24% saying anti-Asian American  racism isn’t a problem that should be  addressed.” In addition, 30% of Black  Americans and 24% of Hispanic and  Latinx Americans were not aware of these increased violations. This information paired with the data from Stop AAPI Hate further ignites my drive to raise awareness of the increase in pervasive and systemic anti-Asian racism.

Self-education: part of the journey

To further one’s awareness about anti-Asian hate, one must first learn about AAPI history.  Asian Americans and Pacific Islanders have helped build and contribute to the America we know today. Their history is American history and should be honored and remembered.

Although there has been a recent increase in reported hate incidents, it’s important to remember that anti-Asian hate and scapegoating is not new. AAPI history has been fraught with racism, including the  Chinese Exclusion Act of 1882 and Japanese internment camps during World War II.

Learn about the history of Asian  Americans and the civil rights movement of the 1950s and 60s and change-makers from the past to present. Learn about the origins and perpetuation of the “model minority”  myth and how it is rooted in anti-Blackness and ultimately hurts Black, Indigenous, and other people of color (BIPOC). Take the initiative to seek out the often free resources available from the public library or the numerous educational organizations online.

Words often hold more weight than we realize. Reflect on how you may have perpetuated stereotypes and bias with the words you use. It’s important to not tolerate hate speech or dehumanizing language directed toward any person of color. Condemn this type of behavior and hold those in your circles accountable for their actions.

Hold space for those in the AAPI  community who are experiencing pain and fear. Do not invalidate the experiences of racism, trauma and the need for healing.  Instead, listen, learn and amplify the voices and stories of AAPI.

Support organizations that are committed to standing against racism, including AAPI  Women Lead, Asian Americans Advancing  Justice (AAJC), LAAUNCH and Stop AAPI  Hate. Get involved at the local and national level to create more equitable and civically responsible initiatives.

Equip yourself with resources that will help you become a better ally for those experiencing hate. Report anti-Asian hate incidents to Stop AAPI Hate’s reporting center. Consider taking a bystander intervention program to help prepare you if you ever witness a hate crime. The organizations AAJC and Hollaback! offer free training that focuses around five actionable steps you can take if you witness any type of harassment or racist attack. You can find anti-racism resource toolkits on the Stop AAPI Hate website (stopaapihate. org) as well as the LAAUNCH website  (laaunch.org).

The AAPI community is a diverse group of people—a rich tapestry heritage and cultures from all over the continent of  Asia and within the regions of Polynesia,  Micronesia and Melanesia. Go beyond thinking of AAPI as a monolith. See our differences and celebrate them through cultural appreciation and not appropriation.

My perspective is that of an Asian  American woman with heritage that is East  Asian, more specifically South Korean.  I’ve often been told I don’t belong because of the way I look. As a child, the messages  I received from society were that Asians are “perpetual foreigners,” and this made me want to shrink down and blend in as much as possible. Through my art, I have been able to reclaim pride in my heritage.  I am unapologetically both Asian and  American, and I want to lean into the joy of my heritage as much as possible. It’s an important part of me.

May was Asian American and Pacific  Islander Heritage Month, or Asian  Pacific American Heritage Month. It was a month to lean into joy through healing events, amplifying stories and voices and celebrating different AAPI cultures. It’s my hope that the energy of this past month can echo across the entire year and our pain and joy can be visible across the nation. Asian  Pacific Americans do belong and are an important part of the fabric of our country. 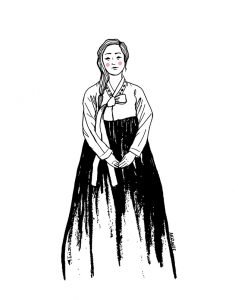 My own experience with racism has made the increase of anti-Asian and Pacific  Islander attacks especially painful, and it brings extra anxiety on top of an already difficult time. Turning toward safe people and spaces has been one way I cope with the difficult emotions I’ve experienced after a year that has been particularly hard for BIPOC communities. Creating art and sharing it with my online community is one way I process my feelings and express the emotions associated with these experiences. Using my artwork to share my voice has been therapeutic and healing.  It’s part of my cycle of learning, processing  and growing into a whole-hearted person who strives for anti-racism.

Above all, the goal of my artwork is to promote empathy and solidarity. I believe that the path to healing includes fostering empathy and caring for one another.  Together we can each use our unique gifts,  whether it be art or another medium, to spark real and meaningful change. 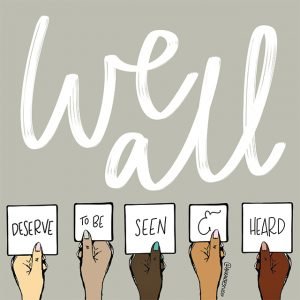 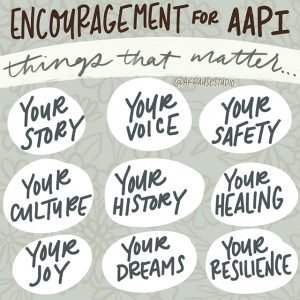 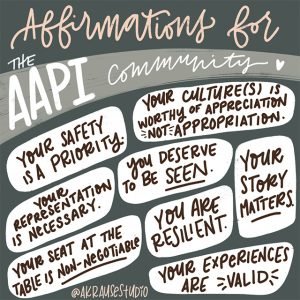 The journey toward anti-racism include partnerships and solidarity between oppressed and marginalized groups of people. Every voice matters, and every voice deserves to be heard. This means the AAPI  community must be included in anti-racism work. Remember to include them in your activism. In solidarity, we must continue to work to dismantle racism through continual awareness, action and empathy.

Amy is the Rochester artist behind A. Krause Studio. Her work explores self care advocacy, mental health awareness, social justice issues and cultivating kindness. Her work is available on Etsy (akrausestudio.etsy.com) and Instagram (akrausestudio).