Mother of two, veteran, entrepreneur and business owner— Beth Fynbo does it all. She spent 10 years in the Army and an additional 10 years going to college and working in a  corporate job. Then, at the age of 40, she gave birth to her first son.

Living life as a new mom opened her eyes to the many things that mothers have to endure. While out to eat with her girlfriends one afternoon, she couldn’t help but notice the restlessness of the babies at her table. She had an idea for a  placemat to keep babies entertained and occupied at restaurants.

“It didn’t exist anywhere, so, long story short, I invented it,” says Fynbo. She decided to make them herself, something she could just share with her close friends and family. But then they started to share with their friends, and so on, and pretty soon there was a constant demand for this life-changing product. Moms everywhere could relax with a sigh of relief when out to eat.

“I didn’t realize just how useful that thing  was until I didn’t have it with me.” That’s when it clicked for her. She could create  Busy Baby, her own business. 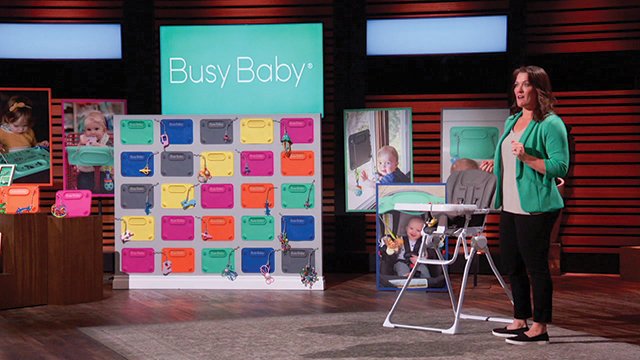 Going on Shark Tank was something  Fynbo had talked about for years, and it was an exciting surprise when she finally was able to do it last year. She says that the  experience was “exactly what I expected it to  be.” However, she didn’t even know if her episode would be aired. When she went last  September, they told her there was a chance that they would not end up showing her episode, and so she was pleasantly surprised when they aired it.

Her silicone placemat, the Busy Baby mat, caught the attention of some investors,  but in a back-and-forth discussion, she ultimately decided to turn them down. “It was weird and fun and surreal,” she says,  but she was not willing to give up such a  large percentage of the company she had built herself. By sticking to her gut, her sales have skyrocketed, and her company grows more and more each day.

Making it as a businesswoman

Fynbo always knew that she wanted to try some level of entrepreneurship. She comes from a family of creators, with her dad being the biggest influence in her life. His biggest advice on establishing a business: “Make sure it’s something that you really love, because there are always ups and downs. If you go through  a downfall and you don’t have passion for  what you’re doing, then you won’t be able  to get through it.”

Putting yourself out there, and making connections is one of the most important things to do, regardless if you know you will succeed or not. Fynbo says that marketing is a key asset to “making it” in any level of entrepreneurship. You might not make a  ton of money initially, but it will get more of the product out there and therefore,  increase sales.

When asked what her best advice is for other women wanting to succeed in business, Fynbo says, “I think sometimes,  a lot of people can feel stuck where they are at, and I feel like you never are stuck—at any point. You could be 69 years old and decide to do something. You just have to do it!”

Sophia is a recent graduate from John Marshall High School. This fall, she will be attending the University of Minnesota to study journalism and creative writing.