Looking up at tall buildings used to scare Emily Mandarino. Her knees would get weak from her fear of heights and falling. When she first tried rock climbing, her heart would thrash from being only three feet off the ground. Now, after climbing for over nine years, she has not only faced her fears but found a love for being tied to a rope and reaching for the top!

“I’m still afraid of falling,” Emily says. “But you get used to it. The more you try, the more you do it, the more it becomes a norm. You learn to trust yourself, your strength and the equipment, so you know you’re okay.”

Emily isn’t the only person in the world with a fear of heights. According to her, it’s not a valid excuse to not give rock climbing a shot. “The benefits outweigh the fear,” she says with conviction. “Yes, you’ll get that panicky feeling, but you learn to talk yourself through it. You tell yourself, ‘I’ve got this.’ And you keep going.” Emily believes that when this positive self-talk happens on the rock wall, it transitions into other parts of life too.

For Emily, rock climbing has changed her life immensely. Beaming, she says that climbing has helped her physically and mentally, and it’s given her more confidence and friendships.

“It’s a full-body workout,” Emily says. “It doesn’t just involve your hands and feet but also your core, your back, your glutes, your quads, your calves, your everything.” Consistent climbers will typically see an improvement in their strength, flexibility and muscles.

When talking about the mental benefits of rock climbing, Emily says, “You get endorphins after climbing! You feel accomplished! It’s a huge part of why I’ve stayed because facing my fears has really transitioned into my personal life.” 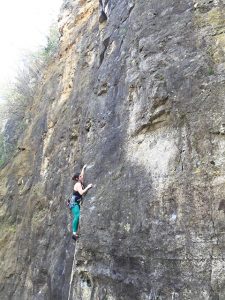 Beyond the physical and mental benefits of rock climbing, Emily says that the main reason she climbs is for the wonderful community. “People are really friendly, open and accepting,” she says. “It’s an uplifting atmosphere. Everyone’s there to encourage each other to achieve their goals, and you won’t see anybody putting someone down for not completing something.”

The climbing community draws in people from all different cultures and backgrounds, from children with single digit ages up to long-time retired adults. It’s a welcoming community where everyone starts at the same place and reaches for the same thing—the top!

“Climbing is my happy place,” Emily says. No matter how busy she gets between her full-time job at Mayo Clinic, part-time job at Roca (a climbing gym right here in Rochester), being a mom to two kids and her other hobbies like running and playing guitar, Emily still makes time for rock climbing. Whether it’s outdoors in the sun, or indoors at climbing gyms, Emily loves to challenge herself on the rock. It’s not only helped her become more fit but she gains more confidence with each tap on the top. Like she says, “The benefits outweigh the fear.” ::