Even the way artists like to be referenced demonstrates the breadth and depth of their diversity. Amy (she/her/hers), who describes herself as a “creative enthusiast,” is a prolific creator of art and owner of A. Krause Studio. She says that she is deeply influenced and inspired by nature and being outdoors. Just take a quick look at her artwork and you will get the sense that you just took a walk in the park. Local artist and “creative” Amrita also finds inspiration for her art and her business, Artria Jewelry, in elements of nature and the world around her. She expands her artistic portfolio with themes of spirituality and her Indian heritage. Despite their varied paths of inspiration and art origination, the creativity that these two artists share is where we see what that they have in common. 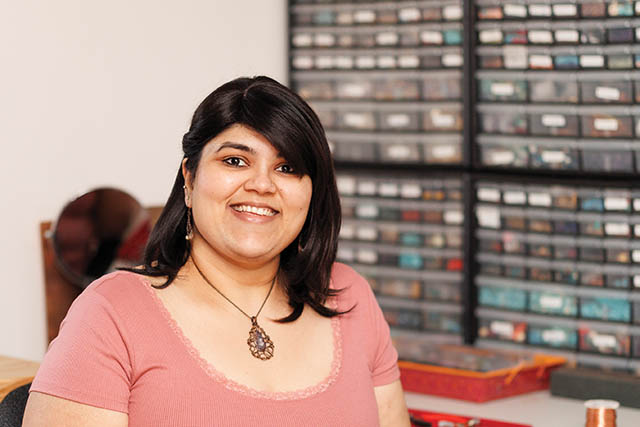 Amrita states quite simply, “I believe everyone is creative; one just has to find their own mode of expression.” She found that mode at an early age and was fortunate to have her artistic interests actively supported by her parents. She also credits schools that she attended for providing environments that encouraged creativity as an integral part of her education. Others helped her find her artistic direction by encouraging her to be open to allowing her artistic exploration to determine the direction of her creative journey. Her interest and creativity continue today.

For Amy, a lifetime of inspiration from education also played an important part in the development of her creative and eventual artistic endeavors. “My earliest memory of realizing how much I enjoyed creating was in the first grade when I would write and draw in a daily journal for school,” she says. Throughout her education, Amy found herself right at the intersection of art and education. Her summers were spent at various camps exploring a wide array of art media. She even found her way to the very front of the class where she started teaching art. All that exploration and engagement in art paid off for Amy as she parlayed her creativity and artistic interest into earning a BA in painting at the University of Wisconsin–Eau Claire.

As an artist, Amrita has traveled quite a distance; she has taken her own form of personal expression cultivated during college and turned it into the business she has today. “My friends wanted me to create unique pieces for them,” and in response, at the early age of 17, she launched her business Artria, whose name is a creative play on words—“art” and “tri,” like in the trinity, the power of three. The business name is also a testament to the media she uses. “I work primarily with copper, brass and silver,” says Amrita.

“An expression of creativity” is one way that Amy describes her art involvement, “My creativity is an intrinsic part of my mental and emotional health as well as an outward expression of my soul. I feel most wholehearted when I am using my hands to create.” Like Amrita, Amy has an eclectic portfolio of art. She describes her creative diversity as everything from “painting a watercolor landscape in my studio to playing with sidewalk chalk with my kids.” Adding beauty “to my corner of the world is so much a part of everything I do.” Amy suggests that being creative with others “can foster community, while creating alone can be an important and nourishing form of self-care.”

Barbara is the community editor for RWM. She has lived, worked and played in the community for over 30 years. Although a Texan at heart, she loves her adopted hometown of Rochester, Minnesota.