Excitement is high as the Rochester Community and Technical College (RCTC) Yellowjackets women’s soccer team gears up to take on their fall season. After their 2020 season was cancelled due to the COVID-19 pandemic, the team is thrilled to be back on the pitch in 2021.

A big goal and practice
The Yellowjackets are led by four captains: Jisselle (Rae) Mayi of Houston, Texas; Fatima Sanchez Hernandez of Banning, California; Olivia Amos of Elgin, Minnesota; and Addison Knick from Big Lake Minnesota. Their goal? To make a run for the National Junior College Athletic Association National Tournament this season. To be successful, the 21-woman roster will need focus, an openness to instruction, teamwork and strong effort. The Yellowjackets are up for the challenge. “This is the year we go to nationals. I know we’re going to make it, so keep an eye out for us!” says Mayi.

Head Coach Bryan Weiss has coached for over 20 years (at RCTC since 2018) and sees something exceptional in these women.

“What makes this team special is that these individuals come in with a wide variety of personal goals (athletic and academic), but their main concern is the success of the team,” says Weiss.

With an eye toward that national tournament, the Yellowjackets practice twice a day for the preseason and once a day when the school year begins. Most practices are about two hours, consisting of injury prevention, skill development and tactical sessions. “I love the thrill and the sport in general. You have to be smart and have good skill to play a strong game! Quick reaction and smart plays are everything,” says Mayi.

The intense practice schedule and hard work is worth it and pays off. “Our team is stronger than you think,” says Mayi, who has been playing since she was 14. “If you look at each individual player, you will see how hard they are working to play. RCTC is full of potential. We came to RCTC for a chance to succeed.” 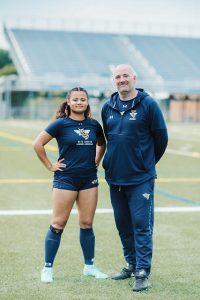 Academics and background
Academics are important to the Yellowjackets. “I really want the team to focus on their studies so that they have options when they move on,” says Weiss. Mayi says she is grateful for the time at RCTC and the ability to focus not only on academics, but also on the sport she loves. “RCTC soccer gives me the practice and push I need to grow as both a player and a student,” she says.

The Yellowjackets shine with diversity in home states, backgrounds and academic pursuit. Six states are represented on the field (Minnesota, Iowa, Louisiana, Texas, Utah and California). Some student athletes are at RCTC specifically for two year degrees, like law enforcement, nursing and dental hygiene, while others are leveraging RCTC as a stepping stone toward scholarships at four-year colleges. Soccer enhances the players’ college educational experience, and they love the sport.


Cheer on the Yellowjackets
It is sure to be an exceptional season for the Yellowjackets. “Come to our games and cheer for us. It would mean a lot to the team to play in front of a loud crowd. Admission is free, so bring everybody!” says Weiss. Check out the team at RCTC Yellowjackets stadium on the RCTC campus in Southeast Rochester. Teams to beat in the state/region include Lake Superior College (in Rochester on September 18) and Anoka-Ramsey Community College (in Rochester on October 20)

Erin is a freelance writer living in Rochester. She serves on the Board of Directors for the National Alliance on Mental Illness Southeast Minnesota (NAMI SEMN) and encourages everyone to help eliminate the stigma of mental illness.