Imagine being sold to a brothel by your father because your family needs money to survive. Imagine as a parent having to make the horrible choice of sacrificing a child.

On a mission trip to Cambodia in 2008, Marti Ogren heard the story of 6-year-old Hoa who was at risk of being forced into the sex trade. Ogren felt moved because she had a granddaughter of the same age and could not imagine the atrocities this innocent child faced. With a heavy heart, Ogren returned home and in 2010 helped to found the ministry Creating Hope 4 Cambodia. Sadly, that same year when she returned to Cambodia, the fate of little Hoa was unknown since the family had disappeared.

Poverty is a significant factor in sex trafficking in Cambodia. The victim’s perpetrators are often gang members but can also be parents, family members, neighbors or friends. Abductions and kidnapping are a common occurrence. Young children are forced into prostitution or arranged marriages resulting in psychological and physical trauma, as well as sometimes suicide, torture or murder.

Education is configured differently in Cambodia, and it is often privately sponsored. Therefore, many children who are lucky enough to go to school leave after fifth grade to earn wages to support their families. Ogren was advised by missionaries based in the country that the best aid would be to educate as many children as possible.

UNICEF states, “Some 37% of the victims trafficked for sexual exploitation in Cambodia are children.” Hotels, massage parlors and bars that often target Westerners serve as meeting spots. Living conditions are horrific, unsanitary and cramped.

Thanks to international awareness and concerted efforts by humanitarian groups, sex trafficking is finally being exposed. However, Ogren adds, “As long as there are flawed humans, it will never stop.” 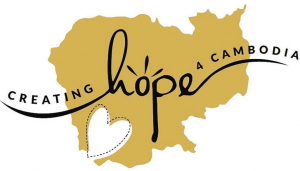 Changing lives, one family at a time

“By changing one family at a time, then a difference can be made,” Ogren believes passionately. At first, Creating Hope 4 Cambodia was helping girls, but with the sex trafficking industry now targeting boys as well, they have pledged to support both. During the first year, eight children were educated. Currently there are 150 that are being sponsored in kindergarten through high school. Some have even gone on to higher education.

“Acting on this passion to help has been so empowering,” Ogren affirms. She adds, “It takes only one person to start a movement.” Ogren is proud of the efforts of all those who have helped over the past 12 years. She stresses, “By focusing on local prevention through education, a bigger impact can be made. Only $300 will keep a child in school for a year.” This includes uniforms, books and supplies.

Office for Victims of Crime

Maka is the owner of WaveMaker Consulting, LLC and a freelance writer and educator based in Rochester.