There are three types of eaters in the world: 1. Those who make faces at something new. “Eh, I’ll stick with my chicken nuggets.” 2. Those who occasionally step outside their comfort zone. “I’ll try it … but what’s in it?” 3. Those who see foods they can’t pronounce and bravely say, “Bring it on!”

Trying new cuisines can be thought of as brave, or you can simply approach it with an open mindset. Think of it as a fun experience that could introduce you to your next favorite dish or as a way to learn about a different culture. Downtown Rochester features many unique places where you can find exactly that.

With options like lamb, bone marrow and oysters, Bleu Duck Kitchen focuses on cultivating a unique dining experience. Jennifer Lester, co-owner, says, “Erick Kleven (her business partner) is a firm believer that what goes on our menu won’t be dishes you’ll attempt to make at home. We want to encourage people to come out to try something new.” 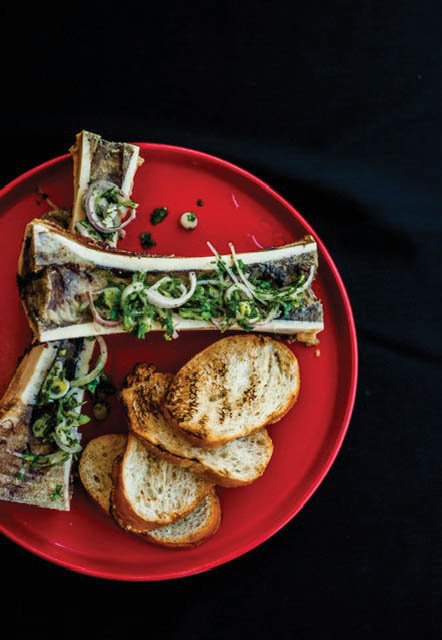 Owning Bleu Duck has introduced Lester to her own list of new foods. When Kleven first encouraged her to try oysters, she felt hesitant, claiming that she wouldn’t be able to get over the texture. “But I took the challenge,” she says with a proud smile. “Now I’m falling in love with oysters!” If you’ve never had oysters before, give it a shot. Bleu Duck’s oysters are shipped fresh from Maine multiple times weekly. You’ll be trying some of the freshest oysters in town!

If an oyster is too far out of your comfort zone, try something nutritious and healthy with a variety of flavors suitable for everyone. Wabi Sabi, a family-owned restaurant with two locations, has a menu featuring delicious ramens, poké bowls and sushi.

“I like to live a healthy lifestyle,” says Jet Ngin, manager of Wabi Sabi’s downtown location. “Our food is good for you. The fat content in sushi is close to zero. Especially if you eat it raw, you won’t lose all the nutrition in it.”

If you’re someone who’s hesitant to try sushi because it features raw fish, Wabi Sabi has delicious cooked sushi options as well. “The California Roll or Shrimp Tempura Roll is good for someone who doesn’t want to jump into the big stuff right away,” says Ngin.

To encourage more adventurous eating, Annie Balow, who owns ThaiPop with her husband, Ryan, took the ever-popular Pad Thai off their menu. She found that people weren’t ordering anything but the Pad Thai, which means they were missing out on all the other amazing dishes.

“I want people to open up,” Annie says. “Try something else. Try something you’ve never heard of before, something that I used to eat a lot at home back in Thailand. If you don’t like it, I’ll send it back and we’ll make Pad Thai for you. It’s no problem. I just want you to try something new.”

Annie glows with delight whenever she sees people fall in love with her food. “It’s important for me to not omit certain ingredients,” Annie says. “I want you to try the true, authentic way it’s supposed to be made. Then you can decide whether you like it or not, but at least give it a try.”

When tasting new foods, the best mindset to have is an open one. So, book a reservation at Bleu Duck and give those fresh oysters a shot. Visit one of Wabi Sabi’s two locations and order a roll you’ve never had. Plan a stop into ThaiPop with your friends and challenge each other to taste something you can’t pronounce. Like Jet Ngin said, “If you never try it, you’re never gonna know what you might miss out on.”