Jodi Ohlsen Read is a mother. She is a mother of four boys, countless lambs, wild bunnies that the dogs dig up—and she is a cheese mom. “My favorite thing about cheese making is the nurturing of cheese,” she says. “Providing the right environment for cheeses to become their best selves so they can travel to be a part of other people’s special day.” The cheese is alive and filled with microorganisms, and so watching it transform from milk to beautiful, delicious cheese is a lot like watching kids grow up.

To make the best knock-your-socks-off cheese, you have to start with the best milk. Shepherd’s Way Farms, just outside of Northfield, started as a sheep dairy farm, where sheep are raised to live the best possible lives. The sheep roam and graze freely outdoors, which not only benefits the sheep and the milk they produce, but also helps the environment. Regenerative grazing builds healthy soil and improves plant biodiversity. “We want to put in as much as we take out,” says Ohlsen Read. “The sheep, the sunshine, the water, the soil—they all feed each other, and we simply get to benefit from a little part of that. Our job is to get that cycle rolling healthily along.” Wool, cheese and meats are some of the products Shepherd’s Way produces.

Shepherd’s Way is an artisan flock-to-cheese farm, which is rare in Minnesota. It’s important for Ohlsen Read to know where her milk is from, what the sheep eat and the condition of her animals. A lot of care goes into the making of her cheese.

Friesago was the first cheese Ohlsen Read ever made. This natural rind semi-aged sheep’s milk cheese has a dense texture, pleasantly mild flavor and a slightly nutty finish. It has won multiple awards and was inspired by manchego and asiago cheese.

Where to Get Shepherd’s Way Farms Cheese 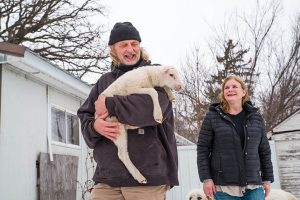 Born and raised in Taiwan by a picky-eater dad and a mom who’ll try anything, Tiffany has tasted a world of flavors. Through traveling, she learned the relationship between food and culture, and the importance of supporting locals. Tiffany currently works as a food photographer, blogger, and occasional artist and designer. You can visit choochoocachew.com to learn more about her foods.