Outside a brick school building, little children laugh as they run around the busy playground. In the air notes float from “The Wheels on the Bus” and “Baby Shark.” A few miles over, in the school auditorium, teenagers release their trumpets and tubas from hard cases. Soon, a lively band teacher will instruct them on which song they’ll begin rehearsing first. Up the road, a woman belts out her favorite 90s boy band song from the album she listens to several times a week. Meanwhile, Grandma and Grandpa are headed to their weekly choir practice with Resounding Voices, a community chorus for those experiencing Alzheimer’s and dementia. No matter the age, music is a part of everyone’s life. 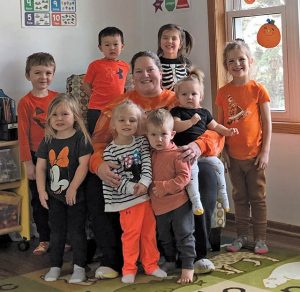 What’s a fun and easy way to help kids learn the ABCs, numbers and all fifty states in alphabetical order? Set it to a catchy tune. Mnemonic devices activate areas of the brain associated with memory, meaning it’s easier to remember the entire quadratic formula if it’s sung to the tune of “Pop Goes the Weasel.”

Kellie Heim, a daycare provider and preschool teacher with over 20 years of experience, uses music to teach the kids things like rhyming words, letter sounds and opposites. To the tune of “Bingo Was His Name-O,” Heim says, “Every morning, we sing ‘There is a girl that’s here today, and Josie is her name-o. J-O-S-I-E. And Josie is her name-o.’” After the song is sung, each child locates their name tag and sticks it onto a chart. “It helps them spell their name, friends’ names and letter recognition.”

Memorizing information isn’t the only thing Heim uses music for at her daycare. Playtime is accompanied by Kidz Bop or Disney music on a speaker which helps keep the environment lively. Heim also uses music as a method of peace. “Anytime the kids are being overly rambunctious and wild, we do ‘calm down time,’” Heim explains. “I turn the lights down low, we lay on the carpet, and I turn on five minutes of kid’s classical music. It does wonders!”

For children, music is an important part of their learning process. As they grow into teenagers, music becomes important to their process of discovering who they are and where they want to be. 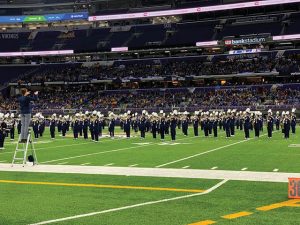 Amanda Kaus, Rochester Public Schools music educator for over 20 years, says one of her favorite parts of her career is being able to watch her students grow as people and be part of a community.

“I’m one of those unique teachers that has their students from ninth through 12th grade,” Kaus says. Passion for her career in music radiates off her as she discusses watching her students “find their identity as they enter adulthood, discover what their interests and passions are and how they foster that through music.”

For Kaus, teaching high school band looked different last year. During the pandemic, Kaus gathered with her students over computers rather than in person. While Kaus felt like a sense of community was missing due to the online format, her students told her otherwise.

“I was always surprised,” Kaus says, “because some kids would tell me, ‘This is the class that feels the most normal.’ If you were a junior coming back, it was peers you’ve already been in class with for two years. That banter was there, whereas in some of their other classes, they didn’t know half the people or had never even met that teacher in person. So that band community became really important.”

The impact of being bandmates doesn’t stop when Kaus’ students exit the classroom. She loves to attend sporting events, graduation parties and weddings of former students where she reunites with other “bandies” and their family members.

In terms of her role in building that sense of community, Kaus says, “In some ways, I’m no different from the kids.” Attending those events is her way of contributing, rather than “just being that person who shows up, teaches my class, then leaves.” To emphasize the importance of building strong relationships, Kaus says, “I think the more we model that for the kids, the more we can help them along their path.”

Music doesn’t only bring people together during high school. Suzy Johnson, the artistic director for Resounding Voices, brings individuals with Alzheimer’s or dementia into one room to sing weekly. There, new friendships are found, and a sense of community is built.

“Thirty minutes before we rehearse, we get together and just visit, get to know each other and care about each other,” Johnson says with a beaming smile. “When you work on something like preparing for a concert, it brings you together.” What Johnson has helped create is an environment where her choir members “feel needed and wanted and part of a group.”

“The dementia is not an issue,” Johnson says. “They’re welcomed by people who accept them for who they are and are there to support them in whatever way they need.” Along with meeting new friends, Johnson has seen how learning new music has such a positive impact by triggering memories for her choir members. “Music lies in a part of the brain that is maintained, and it’s the last part that people lose in the dementia process,” Johnson says.

When she chooses music

for the choir, she purposely selects pieces that were popular when her singers were kids or teens because the “long-term memory is what stays longer than the short-term memory.” For Johnson’s choir members, it’s not only about making friends or remembering the past, it’s also about being happy together through music. “We have a lot of laughs and a lot of fun,” Johnson says. “I’m trying to take away the pressure of singing in a concert and instead, create the joy of learning new music.” 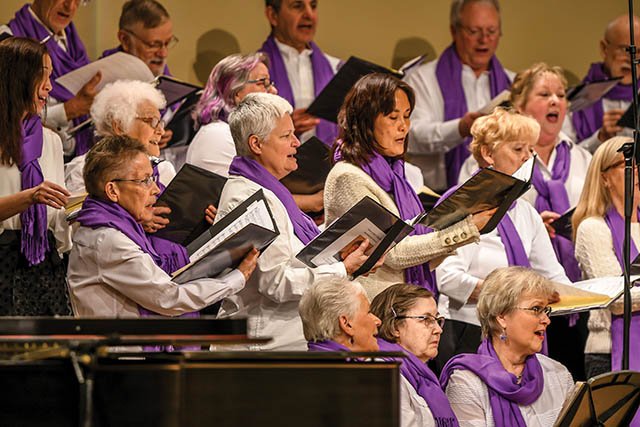 While music plays an important part in education, community building and bringing joy to people’s lives, it can also play a part in a person’s healing process. As a recording artist, DJ and actress Jas “LaidEe P” Hardy’s experience with music is all about healing and helping others heal.

“Since the pandemic,” Hardy says, “at every event I’ve done, there’s always a handful of people who come up to me, emotional, talking about how they haven’t danced like this in so long. How they haven’t felt this vibe or these feelings in so long. Music is a healer.”

Even before the pandemic, people would approach Hardy at her events and tell her things like “I’ve had a bad week” or “It’s been a rough couple of months” and how they “just needed to dance.” Every time that happens, Hardy leaves her events “feeling great,” and thinks to herself, “Yes! I did that! I just set 500 people up to be good for a while!”

Whether it’s a child learning their name through song, a high school “bandie” making lifelong friendships or an adult just singing to be happy, music plays an impactful role in everyone’s life. Kellie Heim uses music to educate her daycare kids in countless effective ways. Amanda Kaus forms a strong community through her time in the classroom. Jas “LaidEe P” Hardy believes it’s important for all of us to immerse ourselves into music as much as possible to heal.

As for Suzy Johnson, she says, “I personally think that everybody should create music of some sort. Whether you play an instrument, or just sing along to the radio, I think it makes us feel better. It just does.”