Fourteen years ago, when Karen Edmonds co-founded Project Legacy with her husband, John, the vision was simple: provide a safe outlet for young students of color who were living in generational poverty to have the same opportunities and experiences their peers had. The first expression of that idea was an after-school yoga class to help young girls build healthy self-esteem. In the years since, the program has blossomed into so much more.

Today, Project Legacy is a nonprofit organization serving youth and young adults of color through empowerment programs. These span from educational support and employment opportunities to wraparound, whole-person care for participants, most of whom are first-generation college students or launching into adulthood and in need of ongoing support.

Founded to inspire and shape legacies, Project Legacy has created an impressive one itself. Since 2008, the organization has served over 300 young people, culminating in over 150 high-school graduations, seeing 75 first-generation students off to college and celebrating over 50 college and technical degrees completed.

Supporting young adults in their next chapter

As the program has changed and grown over the last 13 years, there has been a constant about Project Legacy—its adaptation around the evolving needs of young people. This is how Legacy Scholars began.

But during the pandemic, Edmonds started to notice these young people were experiencing even greater challenges. From losing jobs to struggling financially with the state of the country and economy, they were often ineligible for support programs designed for younger youth, and most had aged out of the system and had no family support to rely on during these challenging times.

As Project Legacy had done before, they adapted and started investing even more into our community’s most vulnerable young adults through the Legacy Scholars program. The program was launched to support first-generation college students through graduation, providing whole-person care and wraparound support, along with tutoring, financial assistance and connection to local resources.

The impact was evident. Edmonds shares this quote from a young participant the organization supported over the last couple of years: “Project Legacy is a true family that restored my faith in humanity, supported me and pushed me beyond my perceived limits. Through Legacy Scholars’ unwavering support, I was able to secure a new job and will be graduating with a bachelor’s degree in social work in May 2023.”

Soon, the organization will see continued growth in the program and will be launching a partnership with Mayo Clinic. Young adults in Legacy Scholars will be paired with mentors and shadowing opportunities at Mayo Clinic, as they evaluate their career paths and pursue higher education.

The need for community support

As Edmonds and her team remain passionate about and committed to supporting young people in the community, she shares that the work does have its challenges, especially amidst the last couple of years marked by a global pandemic and civic unrest.

“The need has increased so much more over the past two years,” says Edmonds. “Project Legacy is often the only safety net for some of our participants—a safety net in a world where people are losing jobs, donations are being impacted and grants being withdrawn. I don’t want to continue making the choices I’ve been forced to make these past two years.”

Edmonds explains these choices might be between paying a young student’s tuition bill or a father’s groceries for the month, between assisting with a car payment so a single mother can continue working or helping with rent so a young person can continue pursuing their degree as a first-generation college student.

Funded primarily through grants and individual donors, the lack of funding and need for a steady stream of support to assist youth requires outreach, consistency and engagement from the local community. While this can be stressful in times of need, Edmonds says even the challenges of nonprofit sustainability have paved a powerful way for the community to both step up and step into the work of dismantling generational racism and poverty. “When people support Project Legacy, whether that is through volunteering, donating or advocating on behalf of our kids, they are dismantling generational racism and poverty at its core,” says Edmonds.

Edmonds tells a story about a young man she met last year who grew up in a dangerous housing project in New Orleans, the Calliope Projects. At two years old, he and his mother found themselves floating on a mattress during Hurricane Katrina. Later, his brother was murdered. Edmonds reflects on meeting this young man after he moved to Rochester for college. “I’ll never forget what he said to me as his introduction,” Edmonds says. “He said, ‘Ms. Karen, the only thing I’m good at is football, and it’s my only way out of that life.’ So I replied to him, ‘Not anymore. You have options, and it all starts with education.’”

In the months that followed, this young man engaged with the programs that Project Legacy set out to reach young people just like him. Like many young people in Project Legacy, he flourished due to the wraparound support that not only acknowledged his physical talents of playing football but his educational and human potential. This kind of potential was ushered into being by Healing Circles and individual support programs that addressed his trauma and emotional health and supported him financially, ensuring he had groceries, access to medical care and more.

With this kind of support, this one young man was supported through community and unconditional love, and his potential rose to the forefront. “My grades went up,” he recently wrote in a text to Edmonds. “I just gotta bring the D to a C and the Cs to Bs and As.” 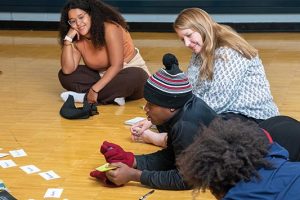 While the state of nonprofit sustainability and funding has never been more challenged, Edmonds and the team at Project Legacy have continued to press on, knowing that what the organization is building will have ripple effects across our community and across generations.

“Project Legacy is about creating opportunities for young people to dare to hope and have the resources and support they need to achieve their dreams,” says Edmonds. “My dream is that the young people we have been mentoring and encouraging through the years will one day take over the leadership of Project Legacy. When we are done, we will be passing the legacy of our work to them.”