Meredith is a beer lover … actually, more than that. She is a beer connoisseur. When asked about her favorite local brewery or beer, she quickly explains, “Every beer stands to be appreciated for what it is. Every style is different and has its time and place.”

Meredith serves as a beer judge in our community, and even when pressed, she laughs and won’t pick her favorite. She explains that there is simply no way to pick just one, even to select just one from each local brewery. Being a beer connoisseur is only one of the many identities that Meredith claims as her own. 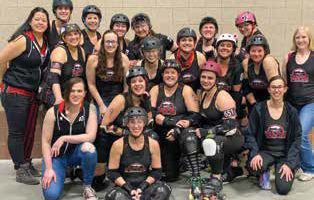 Not your typical Rochester woman

Meredith sees herself expressing many identities: health care professional, athlete, chef, gamer, optimist, activist, mother, daughter—but above all, human. Some of those identities go against the grain of what people traditionally expect when they envision a typical Midwestern woman. Some have brought her into deep connection with others, and some have created challenges, prompting her to push harder to be true to her own sense of self.

Meredith is brilliant with the kind of scientific, analytical mind that most people can only imagine. She is employed as a quality specialist in anatomic pathology at Mayo Clinic, while also enrolled in graduate school, studying bioinformatics at the University of Minnesota.

In her spare time, she enjoys online gaming, another of her nontraditional identities. Through gaming, she explains, “I combine a passion for diversity, equity and inclusion, and art as a content creator on twitch.tv. We discuss themes of acceptance, mental health and inclusion. I just want to create the space that I never had growing up.” She donates all of her income from the site to charities supporting causes important to her and her viewers.

Meredith considers herself a Midwesterner and loves the Rochester community, choosing to come back here twice, once after college and once for her career. She was adopted at a young age by pretty traditional upper-middle-class parents; her dad was a doctor, and her mom was a teacher. She understands that her family afforded her the privilege of a fantastic education both inside the home and in higher education. She traces some of her personality characteristics to her father, who used to argue for argument’s sake, respectfully arguing different perspectives. This helped her to empathize with the experiences of others and develop the critical thinking that has contributed to her success in her advocacy and her chosen field.

She also appreciates hereditary influences from her birth mother, whom she recently met. Her birth mother is a chef and spent some time in law school. Meredith sees her interest in law and debate and her love of cooking from the lineage of her birth family.

Meredith first contacted her birth mother around the time she was deciding whether she would come out. Her conversations with her birth mother actually helped reassure her that it was time to publicly claim another aspect of her identity—that of a transgender woman. When she talked to her birth mother for the first time, she learned that her mother is married to a woman and that she has siblings both by blood and by law who identify as LGBTQ+. Knowing her birth family would be accepting gave her the strength and validation she needed. 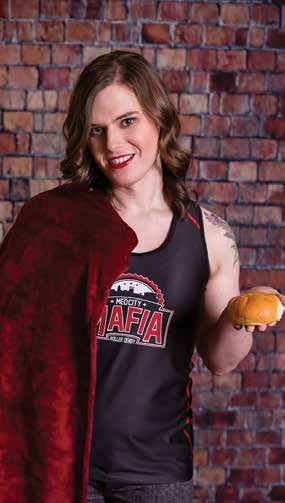 Identity as a construct

Meredith talks openly about all of her identities, sharing, “Some people may not have thought of the deeper issues around identity and cultural expectations.” She hopes that sharing who she is, as a complete person, will help others to reflect deeply about their identities. “Identity is so complex; it can be deep or fluid. It can change with age or the people around us. It is influenced by culture and socioeconomic factors.”

Meredith reminds us that we may have assumptions or beliefs that we aren’t even aware of about what it means to be a certain identity. We may consider those beliefs as true until we meet someone who causes us to challenge those ideas. “We are all in this human condition together. We can coast through it or bring each other along. Everyone’s life is a work in progress.”

She believes we are all just looking for someone who relates to the way we experience the world. Many of us are hiding pieces of who we are because we are afraid of being rejected or excluded, or because there is a stigma surrounding that identity.

For example, for a person with an LGBTQ+ identity, it is difficult to find positive examples of that identity in the media. There are many negative examples, based on stereotypes and objectification, making it difficult to reconcile one’s own vision of self with on-screen characters often portrayed as psychopaths and criminals. One of the reasons Meredith is committed to both her work as the leader of the Lesbian, Gay, Bisexual, Transgender, Intersex Mayo Employee Resource Group (LGBTI MERG) at Mayo Clinic and as a content creator is to help create positive representation in our community and the broader world.

Meredith loves the Rochester community. “I like how diverse it is, with so many opportunities for meeting new people with open and critical minds.” She loves contributing to the health and wellness of Rochester. She has found a home in the fun and welcoming roller derby community that has embraced her despite the fact that the global pandemic hit before she could even skate in her first bout.

As Meredith continues to aspire to be the person she wants to be, she always returns to her values: respect, compassion, integrity, inclusion, shared joy and—as a result of privilege—the ability to hold the door open for other folks who may not have the same privilege.

When asked what words of wisdom she has for readers who may find themselves unable to fully express their own identities, she ponders, “We are all hiding pieces of who we are because we are afraid of being rejected or excluded. Folks I least expected to support me have been my biggest allies. You don’t always know someone else’s identity or values. You are who you say you are and who you know yourself to be. Nobody knows you better than you do.”

When Terri moved to Rochester 13 years ago, she looked to Rochester Women magazine to find connections. Because she works as a nonprofit consultant and coach, helping women find balance, connection and purpose, she knew how important those connections would be for her. Now, she looks forward to offering that same opportunity for connection to others in our community through her work at Rochester Women Magazine. When she is not working, she enjoys looking for seashells, dancing and snuggling her dogs.