Utica Queen is a combination of the best version of myself that I could possibly imagine but filtered through a feminine art form. She is a storyteller,” says Ethan Mundt, the 26-year-old who is known to most of the world as Utica Queen. Utica’s first exhibit with the Rochester Art Center, called “Homecoming Queen,” opened December 5 and runs through April 3. Mundt shares about his upbringing, how he got into the world of drag, his experience on Season 13 of “RuPaul’s Drag Race,” how his career took off afterward and bringing it all back to his roots.

Mundt grew up in the small town of Utica, Minnesota. Growing up on a rural farm, he realized his imagination could soar. Building box forts and making paintings, Mundt allowed himself to be immersed into a creative reality of his own. One Halloween when he was in kindergarten, he wore his mother’s clothes, umbrella, shoes and hat to school dressed as Mary Poppins. It was one of the first times Mundt realized that he loved dressing up and getting into costume.

In high school, Mundt joined the Rochester Civic Theatre, and during his time there, he was a part of Otherwise Actors—a collective that collaborated to curate their own theatrical work. At the end of every show there was a scene where all the cast would cross-dress while fighting over an object, leaving only one person standing. “During that time, I felt something, but I couldn’t quite put my finger on it. Yet I felt so free being able to put on a wig, heels and a dress,” he expresses.

When he got to Hamline University, Mundt, a cis-gendered gay man, was placed in the LGBTQ wing. At the time he had not fully come out but was quickly given the honor to be in Hamline’s amateur drag show, which was his first solo performance. There he realized that he could filter his soul through drag, while sharing a part of who he was. 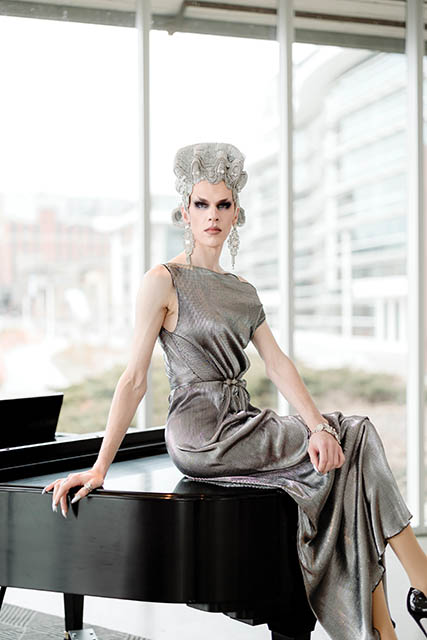 Stepping into the drag world

During his undergraduate years, Mundt got involved in the Minneapolis drag scene. He discovered the competitive aspect, but also how loving and welcoming the community was. When performing at the Gay 90s nightclub and eventually Union Rooftop, he felt like he had peers but was still looking for that tight-knit family.

Looking to spread his wings fully, Mundt moved to Chicago, which allowed Utica to soar more in the world of drag. “As soon as I got to Chicago, I knew this was my place because I felt so loved and accepted,” he says. “The people are so fantastic and so kind. The food is amazing, and the atmosphere is the exact amount of everything that I need.”

Going to the fabric store, Mundt was fascinated at how many more fabrics were available and knew this was the setting in which he could create more and express himself. “I love Chicago because you can get the big-city taste yet it still feels homey,” Mundt explains. “But anytime I go home to Utica, it is a sense of rest and peace that can’t be beat as I get to be around my family.”

Mundt auditioned twice for “RuPaul’s Drag Race,” and it was that second audition that would change his life forever. His inspiration to be on the show came from his years in college when he watched Bianca Del Rio on season 6 and thought about what it would be like if he made it like Bianca did. His first audition was unsuccessful, but that only motivated his drive to try again. “Some of my peers had been auditioning for the show for years, and it was the ultimate dream to think that I could get plucked out of my world and into the world of RuPaul,” he says.

His experience on Season 13 was beautiful. Mundt explains how he went on the show for three things: to showcase his art, have fun and find a family. He says that all happened, and he adds that queens like Joey Jay welcomed him with open arms. Since being on the show, his career has taken off, and he has been blessed to travel for work, perform at big shows, see his work come to life and have his first exhibit. 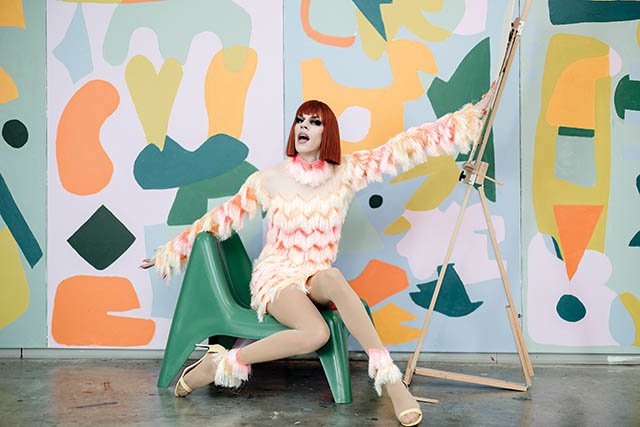 “The whole idea of the ‘Homecoming Queen’ exhibit is to celebrate queerness and the craft that goes into drag through a fashion and costuming artform,” Mundt says. “This whole journey and the work that I have done is now all coming back home, and that is why we are calling it ‘Homecoming Queen.’”

The show came to fruition with the help of Brian Dukerschein, a Rochester Art Center board member who originated the idea and brought it to life with Art Center curator Zoe Cinel. Mundt explains, “When I received the call, I remember (Brian) asking me what my thoughts were on the idea of putting all my work I had been creating into an exhibit, and I immediately said, ‘Yes!’”

When it comes to the drag world and understanding the drag lifestyle, Mundt wants you to know: “Drag is an extension of who you are, but it is also who you are. It is a beautiful artform that is about self-expression, protest and being yourself but to the highest degree. It is a combination of the best parts of yourself, the worst parts of yourself, and it is amplified into something greater.”

He adds, “The drag artform bends traditional ideas about masculinity and femininity. It is an expression of your heart and your soul, and it is also entertainment. It’s a way to take people out of this world for just a couple of minutes and spread imagination and joy. I think what’s so amazing about this artform is that it marries masculinity and femininity so beautifully. As a male-presenting individual, I can create this feminine persona through the art of costuming and storytelling. A lot of my work is blurring the lines and creating a new story and a new form of presented femininity, while keeping the masculinity that is at my core.”

Drag is “taking what we all know and love about being a woman and being feminine and amping it up to shed light on how amazing it is. I feel like a lot of women love drag because it’s honoring who they are.”

The exhibit showcases pieces from Mundt’s earliest bodies of work to his most recent artistic costumes. He designs and sews most of his drag, and he constructed all of the garments in the exhibit with the help of a creative sewing team. Mundt says, “‘Homecoming Queen’ is meant to take a viewer as they come in and provide a sense of awe with the craftsmanship at hand. It is also celebrating those little queer kids who just have a dream to go off into the world, be who they are and bring it all home.” He adds, “This is a moment where I can take those experiences and adventures and pull them all into one space to be celebrated and to celebrate this amazing community that built it.” He hopes that the exhibit can leave people with the sense that they can freely be who they want to be and love themselves for who they are.  ::

:: a note on pronouns

Mundt “uses he/him pronouns out of drag, but like many drag queens, uses she/her pronouns when in drag,” explains Brian Dukerschein, Rochester Art Center board member and co-curator of the “Homecoming Queen” exhibit.

Nana is the visuals production coordinator at GQ Magazine + GQ Style. She is a multifaceted woman constantly evolving, challenging herself, and pushing the status quo.