A young Paige Jehnke, huffing grumpily through her first summer camp experience and writing letters home bemoaning mosquitoes and summer storms, certainly did not realize that she was dipping her toes into a lifestyle that would eventually capture her attention and drive her career straight into the heart of nature.

Paige attributes her love of nature to her father, who was always fond of the outdoors. Between family camping trips and summers spent hiking, swimming and sailing in northern Minnesota, Paige soon found herself leaning into a life in the outdoors. After graduating from high school, Paige abandoned her plan to pursue a degree in art history during a “last-minute freak out.”

“What is it you plan to do with your one wild and precious life?” wrote Mary Oliver, one of Paige’s favorite authors. Paige had decided that whichever path she chose, however wild and winding, it would be outdoors. In a dramatic change of plans, she moved to Alaska to work with at-risk youth through AmeriCorps, then attended the University of Alaska, majoring in outdoor recreation.

Nomadic by nature, Paige went on to traverse the wilderness of many states, working as a ski attendant. kayak guide, deck hand and trail maintainer. “The outdoor jobs I worked were some of the most fun and relaxed jobs I’ve ever had. They also provided the least money and stability. But they were very empowering, and that led me to take more risks on my career path,” Paige says.

Patience stands out to Paige as a major character trait that she gleaned from years working outdoors, especially as a guide dealing with too few pairs of socks on a backpacking trip or parents frustrated with their children. “It’s not a kayaking trip with your family if someone doesn’t cry!” she once said to console an aggravated mother. She also speaks fondly of the quirkier side of extended time outdoors. “One of my favorite things about long-term trips is how weird you get the longer you are out. Being in the wilderness with a tight group does something to people, and it usually is hilarious. I always try to hang onto that weirdness when I get back.”

Dedicated to her outdoor lifestyle but increasingly motivated by a growing desire for some financial stability and health insurance, Paige decided to return to school, this time to pursue marine engineering, with an end goal of working on ships. She acquired her degree and a U.S. Coast Guard license to operate ships with both steam and diesel engines and off she sailed into the sunset—or, rather, into the Great Lakes. She later went west to work on tugboats and eventually worked as a contracted civilian engineer on a military transport vessel stationed in Okinawa, Japan.

As she started working on ships, Paige was quickly made aware that engineering, particularly marine engineering, was not a career path teeming with other women.

“There were times while working on ships that I’d be the only woman on board, and as an officer, I would be in positions of authority. I was put into challenging situations where I really had to prove myself. Some of the crews I worked with were quite young and progressive, but on others I was called ‘sweetheart,’ and people didn’t bother to learn my name. Ultimately, I always stuck to the mentality that I needed to continue working hard and to do the job that I came to do.”

Exploring on a budget

When the pandemic began, Paige was confined to a ship overseas. Amidst anxieties about getting back to the United States and a lack of transparent communication from leadership aboard the ship, Paige’s churning thoughts turned back to her hometown and a new career path, this time as a small business owner. Aboard that ship, the idea to open an outdoor gear shop was born, and Paige set to work building her business plan, the core ideals of which emerged as “get outside, be active and try new things.”

“The idea for Janky Gear was definitely inspired by the years I spent working out west. There were always used gear shops around for people exploring on a budget.” When she arrived back in Rochester, she saw what an active city it was and decided that her business plan could work well here.

During the spring and summer of 2021, Paige worked toward her goal of opening Janky Gear by finding a space, building it out, taking a class on entrepreneurship and business ownership and seeking out consignors to help fill the shop. She found the build-out process particularly challenging. Meeting with contractors, getting bids, wrestling with labor shortages and setting a realistic timeline all proved to be more difficult than anticipated. Paige explains with a laugh that, having worked on shipyards and managed projects, she sometimes jumped in to help mid-demolition, while wondering, “Shouldn’t a contractor be doing this?”

Janky Gear opened in September of 2021 and has since been providing the outdoorsy folks of Rochester with anything from sleeping bags to kayaks, skis, hiking boots and athletic wear. “I don’t think I knew how much of an impact buying secondhand could make to the well-being of the environment until I opened the store,” Paige admits. “I think that conservation is a huge thing that we should be paying more attention to, each of us in our own communities. Keeping places wild and developing a love for the outdoors is important. Having a love for the outdoors can also help us be more conscious in other ways, whether that be donating directly to local parks, investing in reusable products or buying secondhand.”

She shares about the time she spent in Baja, Mexico, where she participated in an outdoor semester through the National Outdoor Leadership School and became a Leave No Trace trainer. “While going through the program, I thought about how even the most avid conservationists make an impact with each outdoor trip. But it is also these outdoor experiences that lead us to protect, donate and volunteer to protect our public lands.”

Recently, Paige started offering two educational classes in Rochester: “Camping 101” and a gear demo class. She hopes the classes will teach people more about gear and camping and, even more importantly, increase awareness in the community that Janky Gear is a place to share and learn, not just a retail store. 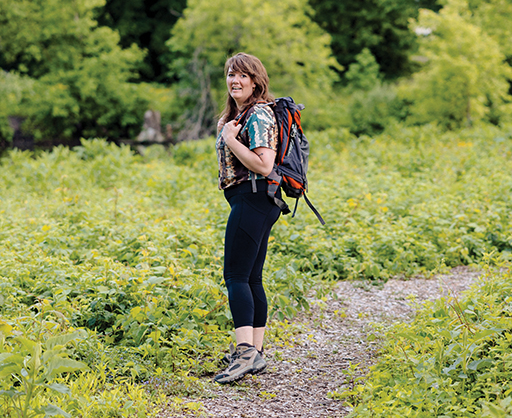 Paige emphasizes that one of Janky Gear’s primary goals is to help everyone in the Rochester community see the outdoors as accessible. “I want people to feel comfortable and make them realize that anyone can be outdoorsy. Sometimes being outdoorsy looks like biking and backpacking; sometimes it looks like sipping wine in your backyard in an Adirondack chair, and both are great!”

Though her work with Janky Gear involves time spent indoors running her shop, Paige always finds time to get outdoors to ski, hike and bike. After all her time exploring the far reaches of the world on land and at sea, she’s taking a step back to explore her own backyard and invest in her community. “I love that moment at the end of a hike, wherever I am at the time, looking out over the wilderness and just feeling small. It’s important to remember that I’m part of something bigger than myself.” Quiet contentment shines through as Paige shrugs and says, “I’m not making a lot of money doing this, but I’m happy, and that’s OK.” ::

While working toward opening Janky Gear, Paige took the Basics of Entrepreneurship class at Collider, a local nonprofit organization that helps educate, connect and empower early-stage entrepreneurs in Rochester, Minnesota. If you or someone you know could benefit from Collider’s work, you can find more information at collider.mn.