In the middle of the pandemic shelter-in-place orders, Brianna (Bri) Thompson became a legal adult. This dynamic young woman from Menomonie, Wisconsin had recently launched a thriving music career that she continues to navigate today through mask mandates and limited show capacities. Through it all, she’s proving that she rocks.

Music at all ages
“My mom encouraged me to do a karaoke performance at a fair-type event when I was 7,” Thompson recalls with a smile.
“Ever since that, I’ve just wanted to sing in front of people!” By elementary school, Thompson was writing her own music. In fifth grade, she performed an original song in front of her music class, singing and playing the ukulele, which she had taught herself to play. When Thompson was 16 years old, she booked her own solo live performance at Acoustic Cafe in Menomonie. This concert still stands as her favorite performance moment to date. “It was the best—the number of people who came, the amount of recognition I received afterward. It really showed people that I was serious about this. Like, look, I booked this all on my own, even guaranteeing more in the future—I’m really doing this.” Thompson also took third place in Menomonie’s Got Talent around this time.

In 2020, Thompson took a semester off between high school and college “because of COVID.”

In addition to her budding music career, she has been busy considering majors and schools for this fall and working as a pizza delivery driver between shows and recording sessions. Despite the pandemic affecting so much of the music world, Thompson was able to book several performances last summer and gain even more steam. “I had almost two shows every week last August,” Thompson explains. “My best friend’s aunt, Heidi Wilkins, is how I came to start performing in Rochester. I mainly perform in Menomonie and Rochester, but I’ve been really wanting to branch out to venues all over western Wisconsin and Minnesota.”

Back to the stage
Thompson has been adapting to life and venues being opened up again, as well as catching up on school and work, so she has yet to perform a live show this year. “I had one show postponed in July, but I do have one scheduled soon at Thursdays Downtown in Rochester. I’m excited to get back into the scene.” She previously participated in Virtual Thursdays Downtown. When performing, Thompson often tries to incorporate some of her favorite songs as covers, mainly aiming for songs that fit her voice. “I also include songs that I find relatable and enjoy—it’s really hard to sing a song I don’t have an emotional connection to.” The covers are in addition to her original songs. Brianna Thompson’s music, solely produced and written by her, is available to stream on all platforms. Her newest song is called “Talking in the Driveway.”

Here’s to the girls
For other young women and girls wondering if they should start a journey with music, Thompson has some words of advice. “Music teachers were my biggest support, especially in finding others to connect to and finding different ways to contribute to the music scene. Now I know if you keep finding connections, you can get anywhere. It’s all about networking, branching out, and
facing fears.” 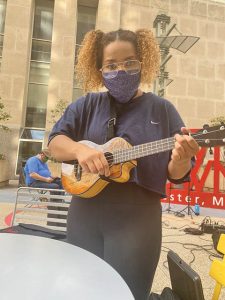